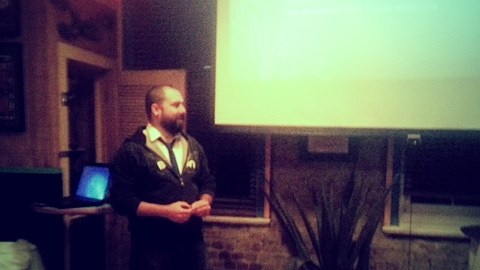 I gave my first public talk last week. It was a talk on SQL Injection that was given at this month’s NolaSec meetup. And, I have to say, I really enjoyed the experience.

The talk was titled “Make The Web SQueaL: An Introduction to SQL Injection.” It was a pretty quick talk. The goal when written was to make a 20 minute-ish talk with room for questions at the end. And I think I got pretty close to that. It was really geared to being purely introductory. To that end it was very high level with a few slides devoted to what is SQL and SQL Injection. Then moving on to how SQL Injection works, and what can be done with it.

To go along with the talk I created a cool little lab environment, to help demonstrate exactly what SQL Injection is, but I think I did a poor job of introducing it at the end of the talk. My intent was to offer to demonstrate after all the talks were concluded, but those words escaped me while I was up there.

The experience, for me, was the best part of the night. Many of my co-workers expressed interest in attending the meetup. I’ve given a few talks within the company before, on similar topics. And apparently that was enough to make them what to learn more and support me. It was extremely gratifying, and nerve wracking at the same time. A good handful of my coworkers made it out.

The talk itself made me a little nervous. During the introduction they pointed out that it was probably one of the largest groups they have had attend one these meetups. So, nothing like go big or go home. I presented my slides at a pretty good clip, but I kept watching the faces in the crowd and from what I could tell everyone was following. During the question and answer section. I got a really good group of questions, that helped let me know that what I talked about, was not only absorbed, but was being applied in their minds to the work they do.

In all. It was a great experience. And I very much look forward to doing it again.